“A ball-jointed doll is any doll that is articulated with ball and socket joints. In contemporary usage when referring to modern dolls, and particularly when using the acronyms BJD or ABJD, it usually refers to modern Asian ball-jointed dolls. These are cast in polyurethane synthetic resin, a hard, dense plastic, and the parts strung together with a thick elastic. They are predominantly produced in Japan, South Korea and China… They are made to be easy to customize, by painting, changing the eyes and wig, and so forth. The modern BJD market began with Volks line of Super Dollfie in 1999. Super Dollfie and Dollfie are registered trademarks but are sometimes erroneously used as generic blanket terms to refer to all Asian BJDs regardless of manufacturer.” -wikipedia

To illustrate the mechanics, here’s one of my dolls. She is an “Amber” from “FantasyDoll” (also known as “FDoll”) that I physically modified and dyed but have yet to paint.

I’ve been collecting, painting, and customizing ball-jointed dolls since 2016. These dolls are painted and dressed and can be very stunning/lifelike when completed- which includes the insertion of glass/resin eyes, application of synthetic eyelashes, and construction of wigs.

This is my SWITCH “Holy Soseo” head on a Soom “Supergem” body.

I started to design my own ball-jointed doll in December of 2017, and this project was actually what motivated me to start 3D modeling last fall.

When resin ball-jointed dolls first started to be produced in the 90s, the characters depicted were very young, prepubescent children, usually stated to be around 7 years old, because of this, most early ball-jointed dolls are highly androgynous, with “male” and “female” sculpts differentiated only by the sets of clothing that came with them, and occasionally a small bump to represent a penis or a carved line for vulva. In the last few years, though, “mature” sculpts have dominated the scene. These dolls, unlike their childlike predecessors, are meant to depict adults, and are almost always hyper feminine/masculine. These dolls cannot share clothes, let alone parts- even a “male” leg will be incompatible with a “female” body. While these dolls are beautiful, it is alienating to transgender individuals, whose bodies are often radically different than these depictions.

Dolls are, at their core, articulated sculpture, and there is a long standing tradition of using the medium of sculpture to record human beauty. For that reason, I am creating a doll that captures the beauty I see in myself, as a transmasculine individual, and I see in other, transfeminine individuals, including my fiancee. My doll will have two versions- two chests (one flat and one more full) and two hip pieces, one with external genitalia and one with internal- all pieces interchangeable with each other.

(Specifically, transmaculine internal genitalia, which is quite different from cisgender women in those individuals who, like myself, have taken testosterone replacement therapy. Testosterone causes the clitoris to swell and become remarkably similar to a 1-2in penis)

When sculpting a ball-jointed doll its best to sculpt first and design the joints later. I started on the base shape I want the body to be. There’s a weird seam from using the “symmetry” feature in C4D that’s deforming the face, but my focus is on the body first, then face, the, hollowing, then joints. 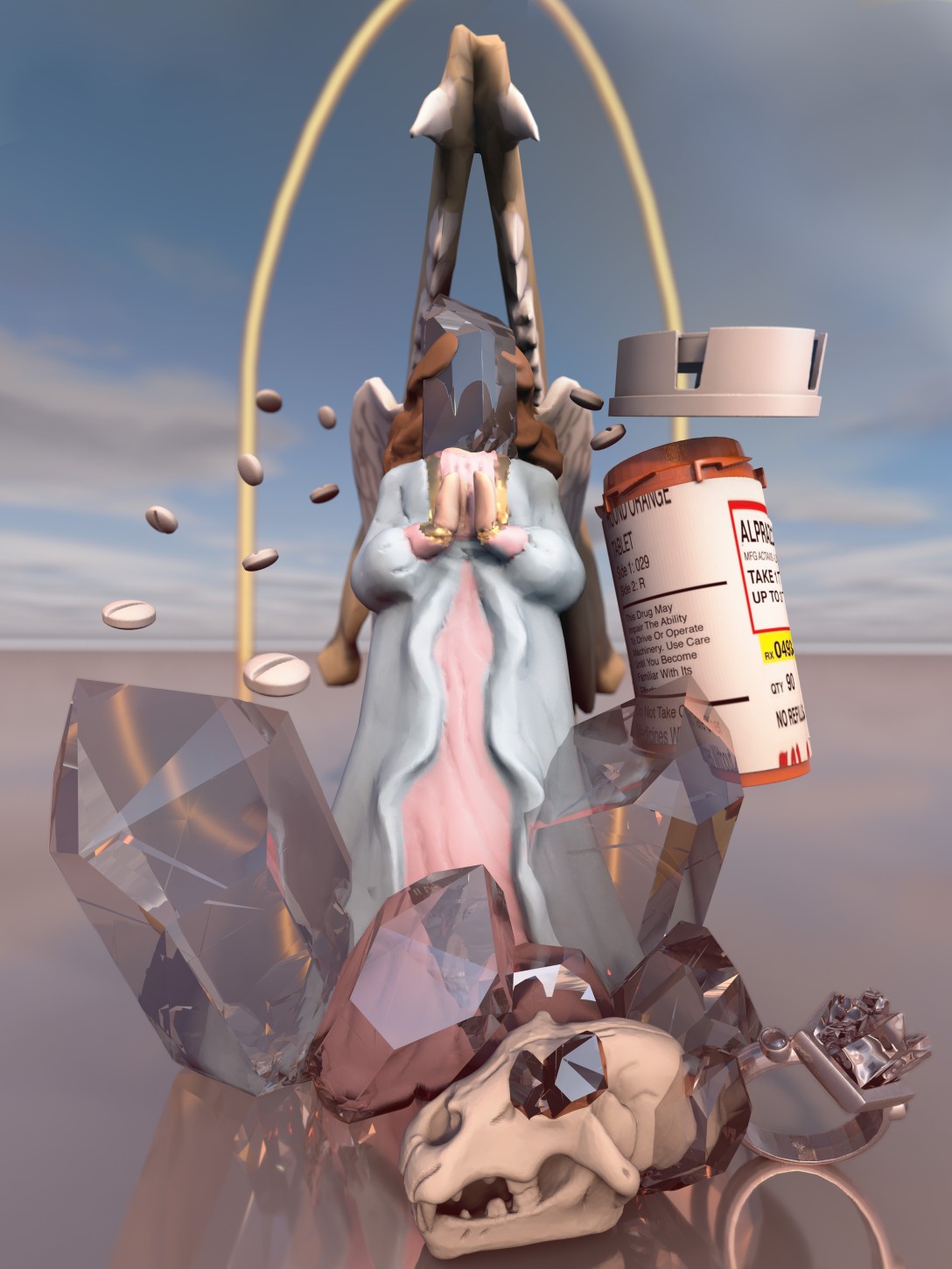 this project started with an assignment to 3D model five real objects. I’m a little bit of an eccentric collector so I had a lot of items to chose from. I eventually decided on an angel statue I purchased from a thrift store with the intention of repainting for another project, one of my custom vinyl dolls, a hand off my large resin doll, a opossum jaw bone I cleaned myself back in 2016, and a chunk of clear quartz I particularly like. This modeling was pretty straight-forward, but was incredible time-intensive. In fact, I ended up bruising a nerve in my leg from sitting in the same chair for an entire weekend (my right foot was paralyzed for a few days but eventually healed). To other artists- remember to take breaks!

I started thinking about what I wanted to do with this project with my test print- while only the angel statue is distinctly religious, for me, the jaw and crystal have a place in my spiritual practice too. I drew inspiration from the discussion of “altars” in The Addivist Manifesto

I wasn’t completely happy with the depth of field in this render, and I couldn’t figure out why the ambient occlusion setting was making my crystals look so opaque (it turns out I hadn’t selected “evaluate transparency “)

With this piece, I continued my exploration of religious imagery that I have been embarking on for the last few years. My own religious practices are somewhat eclectic, which is how I ended up in the possession of many crystals, animal bones, but also a angelic statuette.

After seeing Olivia Luo’s gorgeous Rx bottle model, I considered how prescription medication fits into the world of religion. Up until very recently, in the grand scheme of things, medicine and religion were one and the same, with doctors superscribing prayer just as often as pharmaceuticals. With the spread of the germ theory of disease a line was divided- these things are “religion” and “prayer” and these things are “science” and “medicine.” When one considers the power of phenomenon such as the placebo effect, though, how can we be so sure such a stark line exists? Some sects reject modern medicine as being against the will of God, but for those who don’t, how different are pills from miracles?

The final render for this piece, 19.5×26″ at 300 dpi took 72 hours to render- mostly because I actually had to render this piece twice- once with and once without depth of field on- so that I could get exactly the models that I wanted to be in focus in focus. I used layer masks to stitch the two models together.

I created a custom frame for this piece- partially for cost reasons and partially so I could have something extremely unique. I purchased a simple wood 24×30″ frame on clearance from Blick ($44!) and 3D modeled custom embellishments.

After the embellishments were printed and coated with XTC, I applied gold leaf to the entire frame. Mushrooms have long been a motif that has fascinated me- their place in the ecosystem as decomposes makes them the “life after death,” which feels nearly religious. When deciding what to do for my final project I considered Assignment 3  A (Trans-species Growth)- but rather than micro fungi growth I considered the possibility of growing full sized mushrooms out of a (wooden) sculpture- theoretically carved at life scale by a robotic carving machine.

To accomplish this project, I first sculpted a figure in the traditional “T-pose,” which I then rigged and posed as I wished. I used the hand model I created in project 2 (Anthropocentric Stalactites), and for the final figures, I used my own head which was scanned with photogrammetry

If this project were a real-life realized art exhibition, it would have to take place in a greenhouse because most mushrooms require heat and humidity to grow properly. The art exhibit would be installed in place and left to “grow”- over time, the mushrooms would decompose more and more of the sculptures until the human features would become unrecognizable beneath the mushroom carpet, mirroring the natural process of remains decomposition.

Like with my second project, Anthropocentric Stalactites, I created a customized frame for this project. I did so by traditional sculpting mushrooms in paper clay, which I painted and applied to the frame. The wood and mushrooms of the frame mirror the ones in the piece itself, in a way, bringing what is a theoretical project into the real world. 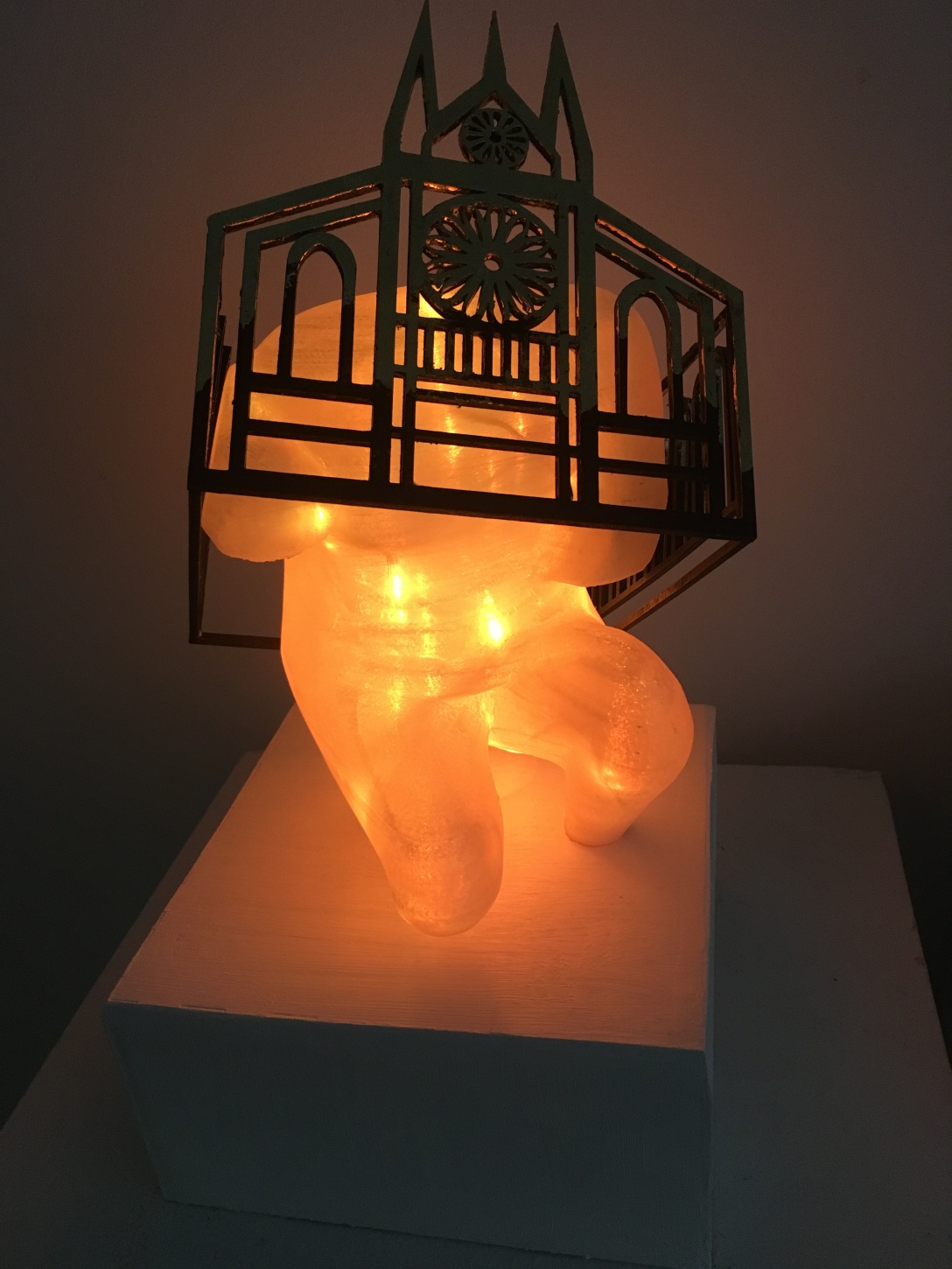 Blobjects are transmutable: in “When Blobjects Rule the Earth” Bruce Sterling describes the terminator- a human shaped skeleton, surrounded by liquid, motile material, as a blobject.

This may seem antithetical to human bodies, which we view as static, but that’s really not the case. We grow and change as we mature, and even after our growth plates have sealed our bodies are not static. Our skin, our “packaging” will grow and stretch as we gain weight, and snap back when we lose it. Even our body fat distribution can change based on age and hormone levels.

The idea of humans as blobjects speaks to me particularly as a transgender man. My body is very much not static, and I’ve watched it change rapidly over the last two years. Most dramatically, this last summer I removed about three pounds of flesh and 18 square inches of skin from my chest.

The second inspiration for my project is the saying “your body is a temple.” The most common usage of this term, mostly from religions that have bans or taboos on body modification, including Judaism and Christianity, comes with the subtext “… so you shouldn’t change it,” but, my body is MY temple, and I have claimed it as my own.

Why does my fleshy form have no head? I’ve drawn inspiration from the works of Nicola Samori, who distorts figures reminiscent of Italian Renaissance artwork, primarily their faces. To me, Samori’s work has spoken to a distrust and distortion that I feel in regards to Christianity, with Christian art as both metaphor for the church as a whole, and also the very real propaganda that it is. Samori often distorts the faces of the figures in his work, speaking to a loss of reason and personhood. Additionally, by leaving the figure headless, I am highlighting the nature of flesh as an entity in its own right, not just as the vehicle of the mind.

The fleshy form may seem familiar to you- I’ve drawn inspiration from the many statues of “Crouching Venus.” This is partially out of necessity- this is my first time 3D modeling and I suspect I would drown without a real 3D object to reference. Also, though, what exemplifies the body-as-divine more than neoclassical Hellenic sculpture?

There was a steep learning curb with this project. After doing art exclusively in two dimensions for over 14 years, even thinking three-dimensionaly was a challenge. Despite the challenges, there are a lot of advantages to working in 3D. For example, I knew I wanted the church structure to be angled on the figure’s back, but I wasn’t able to capture the perspective correctly in my 2D sketches. Once I had the two items rendered, though, I was able to move them around and construct a composition intuitively.

for my final construction, I went with the translucent, back lit prototype, but increased the number of lights and tweaked the painting on the church structure, including the use of gold leaf instead of gold paint. the final piece stands at almost a foot tall with the base and is lit with usb lights that can be run off a battery pack or a wall outlet 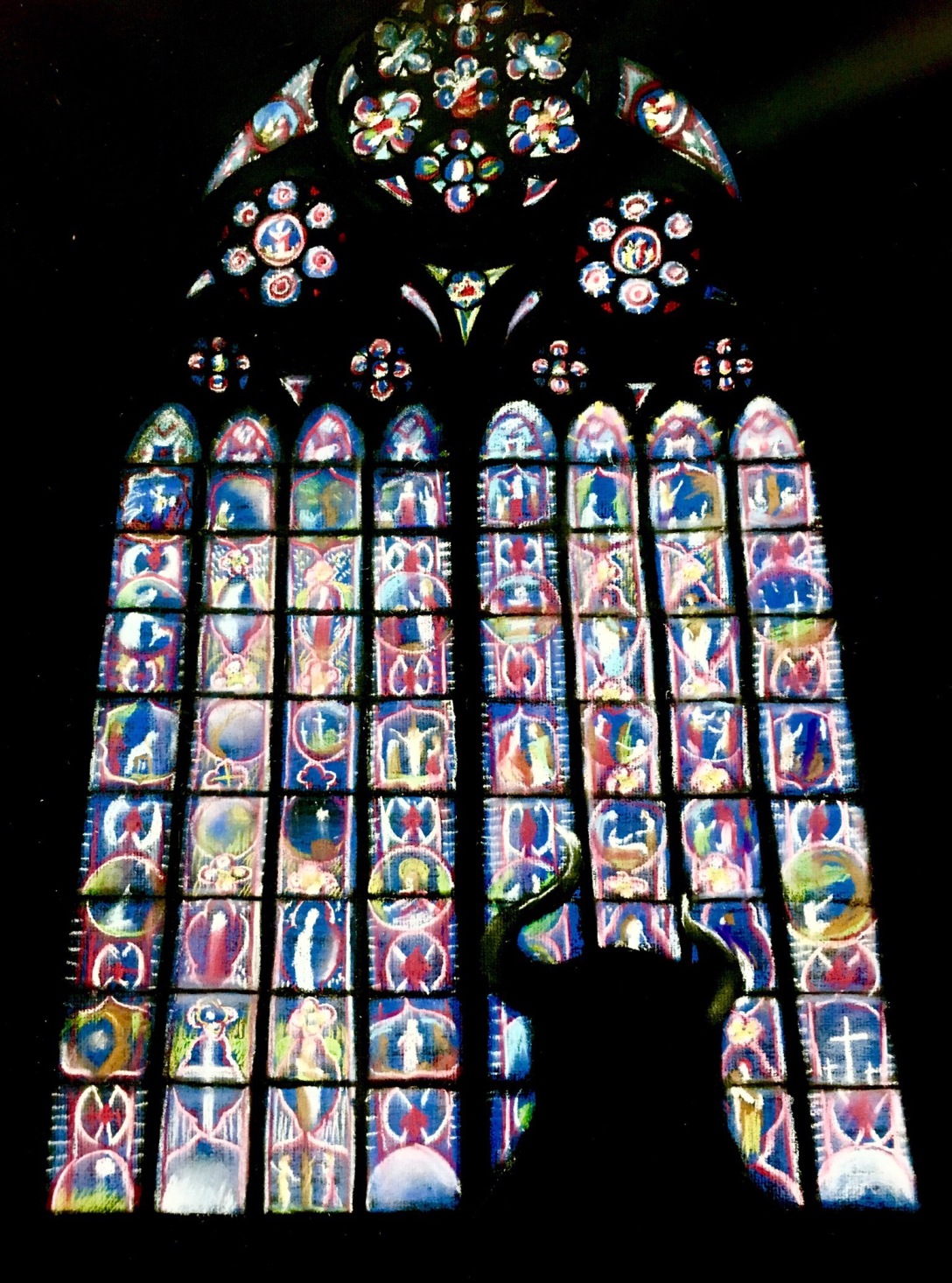 The central idea of my concentration was to use and twist Christian iconography to express my experiences as a pagan living in a Christian society. Primarily, I used gold to express what I feel is truly holy, because Christian art does the same, and by taking this symbolism and applying it to nontraditional things, I call into question the nature of holiness.

My idea started as very simple, I would use gold on things that Christians would find objectionable, such as a demon or my pet rat to express my observations of the hypocrisy and absurdity in mainstream American Christianity. As I went on, my concentration became less about what I saw, and more about how it made me feel, including the stifling nature of mainstream holiness and the eventual discovery that comes with practicing paganism in private.

However, while interesting concepts, the pieces I did as a high school student don’t hold much visual weight, and I think they would be much more successful as 3D renders.